Susan Wicks and I both translated the same poem (‘Rien n’empêche d’autres oiseaux’) by Ariane Dreyfus, then came together for this Ledbury Festival event, chaired by Sasha Dugdale, editor of MPT, to discuss the intriguing choices and exciting discoveries we made during the translation process.

Wearing my writer-translator hat, I’ve recently been interviewed by Tash Keary and Theophilus Kwek for The Kindling, issue three, and by Francesca Beretta for the Oxford Writers’ House.

I’ve recently translated her stunning sequence of twenty-four sonnets, some of which appeared in MPT No.1 2016 ‘The Great Flight’.

You can read Sonnet 18 on the MPT website (with a brilliant ‘distraction-free reading’ option), Sonnet 7 in the Europe issue of Eborakon, and Gareth Prior’s post on Louise Labé and translation generally, on his blog.

I’m delighted to have co-translated, with Pandora, four poems by Nge Nge (Kyaukse), which appear in MPT No.2, 2015 ‘I WISH…’

You can read ‘State of Emergency’ here 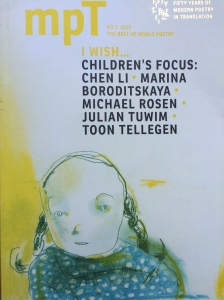 This open-air poem called to me, as it would to any serial escape artist. I was carried away by it (or rather, emballé – a Goffette verb, see 2, line 18). Wanting to continue both the momentum and the conversation of the poem, I began to translate.

Goffette’s poetry travels well into English, due partly to poetic affinities (Auden, Frost, Larkin), partly to its distinctive tone of voice. I felt that my way in would be to try, in English, to ‘hear’ this tone, with its disarming blend of self-deprecating humour, irony, and humanity.

His inventive use of irregular metre, incisive caesura, stanzas that change gear (couplets, tercets, quatrains) and a runaway last line, serve the play between serious and humorous, heavy and light. It’s as if he uses the weight of his troubles to freewheel down one hill, the better to race up the next and find a lightness in his writing to counter them.

French is good at expressing impersonality. The directness of ‘we’ or ‘you’ in English always feels like a disappointing loss of range when rendering the French ‘on’, especially here, where (1, lines 9-18) it enacts a shift towards the therapeutic distancing from the ego the cyclist craves.

Challenges came from highly idiomatic, or culturally specific, language. In part three: le rongeur de frein (‘brake rodent’), la mouche du coche (‘stagecoach fly’), and la Cour des Miracles: in the Paris of Louis XIV, the nickname given to the slums, for the beggars miraculously cured of their ills when they went home at night. I went for ‘rookery’, as it assumed a dual function, a wink to the original that also caught the atmosphere of the closing stanza: it’s dusk, you can’t drag your heels any longer, it’s time to head home…